We all have that one food item we MUST try when we visit a new destination. For some people it’s the best burger, for others it’s pizza. Me? I’m all about the doughnuts. I don’t care where I am or how brief my visit is… I’m finding the best local doughnut shop.

I’ve had some great travels across the south this past year and of course, that meant lots of local doughnuts. As a self-proclaimed #LocalDoughnutAdvocate (feel free to use this when you post local doughnut pics on Insta) it’s only right that I share this precious knowledge with you, friends. This list is a work in progress and will be updated as I try more southern doughnuts. If you have any doughnut recommendations, let’s hear them! Share with me in the comment section.

I was in Asheville for a press trip at the Omni Grove Park Inn over the summer. Being on a press trip is tons of fun, but it means that most of your days and nights are planned for you already. So what do you do when you discover a pocket of free time? Hit up the local doughnut shops, of course! Hole was my first stop because I was intrigued by their concept. They make their doughnuts fresh to order, right in front of you! I nearly lost it as I sat at the counter watching them create these piping hot beauties, and then nearly lost it again when mine was handed to me like a swaddled baby. My doughnut was a seasonal flavor, tulsi lemon sugar, which is probably the most unique doughnut flavor I’ve ever had. Tulsi is a type of basil and not something you’re likely to find in a doughnut shop. The combo was sweet and herbal with a nice tang from the lemon. I recently visited Asheville again and I ran right back to Hole where I tried the vanilla glaze. They use real vanilla in the glaze and the result is nothing short of irresistable.

Vortex has an industrial vibe in keeping with its South Slop location amidst all the local breweries. If you’re REALLY looking to indulge, plan your trip so that it includes a stop at Vortex, Buxton Hall Barbecue, and one of the MANY breweries in the area (I especially enjoyed Burial Beer Co. and Catawba Brewing).

If you can’t swing beer and doughnuts at the same time, why not have the best of both worlds? The seasonal tap doughnut featuring a local beer glaze and a crunchy pretzel topping. If you have some work to do, grab your laptop. The shop offers plenty of seating and sells 1000 Faces Coffee to keep you fueled.

When I visited NOLA for Christmas last year I knew I HAD to visit District’s Uptown location. Whimsically flavored doughnuts and Stumptown Coffee? You bet I’m there. Their flavors change all the time but since I was there for Christmas I had the peppermint bark. Actual chunks of peppermint bark on a doughnut, what can be better than that? I do regret not getting a breakfast sandwich, though. They were cranking them out on the griddle right in front of me and I had such remorse. Guess I’ll have to go back!

Getting Christmas started with a peppermint bark donut in New Orleans, can you think of anything better? 🎄🎁 #followyournola #nolaeats

You can find Julie Darling in Chattanooga’s North Shore neighborhood. The shop has a vintage feel with old-timey, “girly” font and lots of pink and blue hues. There’s also an array of creative doughnuts! You can get a doughnut sundae, which sounds amazing, but I kept it simple at 8:00 a.m. and went for just one classic iced doughnut. Check out that shade of blue! (Have you caught on to the doughnut Instagram formula? Doughnut+Pretty Wall= Instagram gold).

Makers is a pretty hipster doughnut shop found in Knoxville’s Downtown North neighborhood. You’ll find it near a cool, old (spooky) cemetery in an industrial area that’s now undergoing revitalization. Next door is their sister coffee shop, Remedy. Makers’ aesthetic is pretty minimalist with just the slogan, “Makers gonna make” painted prominently on the wall and some merch on display. With limited seating inside it’s not the kind of doughnut shop that makes you want to stay awhile. But, if you love cake doughnuts then none of that matters, you’ll be perfectly content to grab your doughnuts and eat them in the car. I was able to snag a seat at the counter and enjoyed the heck out of this maple bacon doughnut. Frankly, it’s the perfect breakfast doughnut: the glaze is made with maple syrup and coffee, and the bacon is Benton’s (salty, local to Tennessee but available everywhere). Pair it with a cup of coffee for the ideal morning situation. I’m a little jealous of Knoxville peeps because Makers is open until midnight on Fridays.

This Knoxville doughnut spot is approachable with plenty of parking in its strip mall and plenty of seating in the cafe. Here you’ll find yeast and cake doughnuts but my favorite treat here was the apple fritter. It was packed with apple pieces and screamed FALL, even though it was only May.

I should probably do a roundup of Atlanta doughnut shops, but if you’re in town and only have time for one doughnut stop I say pick Revolution. Not only is it ITP, but it’s near all the action in Inman Park, so you can easily visit while doing other ATL things. They have a variety of yeast and cake-style doughnuts and many happen to be vegan. Their original shop is in Decatur, but I’m particularly fond of the Inman Park location as it has more space and an excellent coffee program. It’s hard to pick a favorite doughnut, but they really excel at fruity flavors like this raspberry glaze.

But, let’s say you have time to drive OTP for a doughnut (or, you’re like me and you will MAKE time), then go for Doughnut Dollies. Cobb County is packed with fabulous doughnut shops, but Doughnut Dollies strikes a balance of artistic doughnuts that are also delicious. DD is somewhat hidden behind Canvas, their sister restaurant, and I kind of like to think of it as a doughnut speakeasy. Get there early and snag a “Sweet Jane”, a doughnut sliced open and stuffed with pastry cream. Their seasonal doughnuts are great, too, but the “Sweet Jane” is a year-round favorite. Jon and I love to grab breakfast at Canvas on Sundays followed by a trip to Doughnut Dollies. They also serve Jittery Joe’s coffee which isn’t something you see often enough around here. 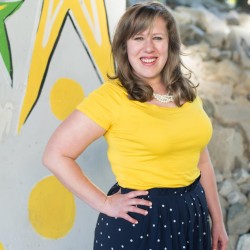